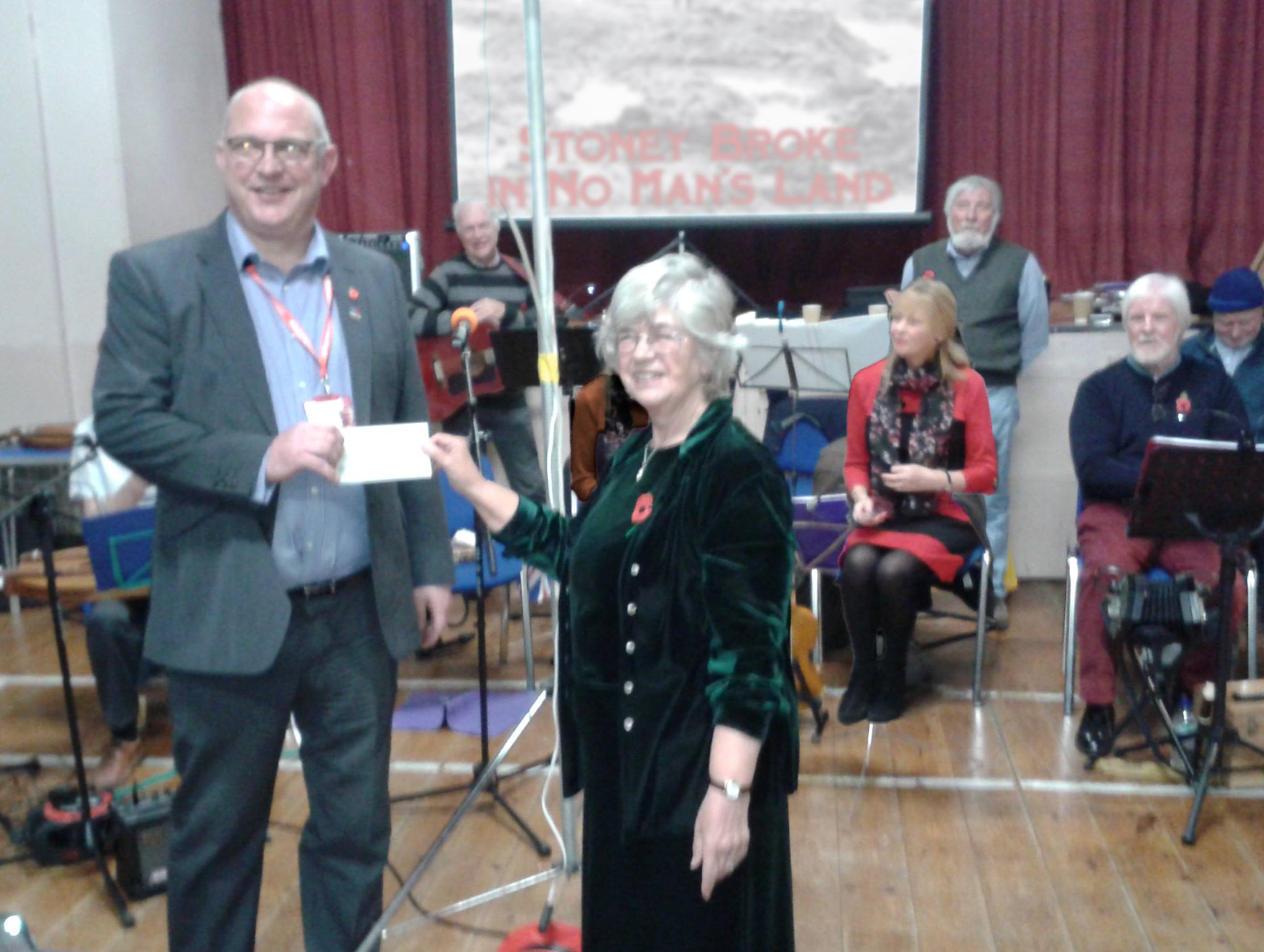 We will be performing our Great War presentation, Stony Broke in No-Man's Land, on November 11 at 7.30pm, at St.Bart's Church Hall, Maurice Road, Bristol BS6 5BZ.    This is to mark Remebrance Day, and also the centenary of the official end of the Battle of the Somme.  Admission is free, but we will be accepting donations to cover our costs, and for the British Red Cross.  Stony Broke has been very well received wherever we have played it - brillian, thought-provoking and informative are the owrds most often used!

We will be dedicating this performance to the memory of our friend and colleague Olga Shotton.

The Hotwells Howlers have been deeply saddened to learn that Olga, one of our longest-standing members, died last week.   Despite being in her late 80s, Olga was still singing with us in the early part of this year, and was driving in to Bristol from Blagdon every Sunday for our 8pm rehearsal, until well into midsummer.  Olga seemed indomitable, and it is hard to believe she has gone.

Olga had been a lively and enthusiastic part of the Bristol folk scene since the early days of the Revivial.  She could be seen carting a suitcase full of song books, badges and Morris bells around the clubs as an itinerant EFDSS Folk Shop, and visiting singarounds and folk weekends at Pennymoor and Whittlebury.  For a while she was drummer with the ceilidh band Kit and Boodle, helped run the Folk Tradition lamb or pig roasts at Fairlands, near Cheddar, and learned to play bones and spoons by practicing for ages (her words!) . She took on the management of the Folk Tradition Club, meeting at the Nova Scotia, and with the help of friends, kept it going until 2000.

A year or two later Olga joined the Hotwells Howlers.  She enjoyed "saucy" songs, and sang them with a twinkle in her eye.  She was always ready to take part in our various semi-dramatic productions, and has played, among other things, a number of landladies, a singer for Cecil Sharp, and a missionary to the navvies!  Olga had a great interest in researching history and worked with us in creating our current piece on the Great War, "Stony Broke in No-Man's Land".  In particular, she generously share with us some of ther father's writings about his experiences as a socialst Conscientious Objector in that conflict, a task which she found quite painful.

Beside the Howlers, she sang in her local church choir, and until fairly recently, "Bristol Harmony" and "Called To Be Saints" two West Gallery choirs.   Until a few years ago she also kept sheep, only giving up when she began to find chasing the runaways through Blagdon village beyond her!

The Howlers will certainly not be the same without her.  Go in peace, Olga.

We are sorry to say that Anna Reynolds has decided to leave the group, mainly becasue of the demands of her dog-minding business.  This leaves only 2 female singers.  If youare a femalesinger who loves traditional Engllish singing, and are prepared to practice in Bristol most Sunday evenings, we'd love to hear from you.  It will help if you are also up for the occasional bit of acting. You can contact us through this site

Further opportunities to see Stony Broke in No Man's Land

Our multi-media production about the Great War and its significance in Bristol and the West Country has been played to great acclaim and enthusiasm - the most used adjective about it has been "brilliant"!  There will be 2 further opportunities to see it this month, on November 14th at Kilmersdon in Somerset (where you can also have a wartime meal!) and at Westbury in Bristol on November 28th.  Go to the Stony Broke page for more details of the presentation, and to the calendar for dates, tickets, venues etc.

Singing in the May with Thornbridge

On May 10th, Old Down Inn Emborough Somerset. The Hotwells Howlers join with superb local group Thornbridge for an evening of Spring and May songs- lyrical, lusty, and ritual. Tickets may be available on the door, but space is very limited and you are advised to pre-book, from maymorning@sky.com or Dave Byrne 01761 419224

Stony Broke in No Man's Land at Staple Hill Bristol

Don't miss this multi-media event, which will be presented at Staple Hill Methodist Church, High St Staple Hill Bristol, BS16 5QN on June 20th at 7.30pm.  We have researched and created this commemoration of the impact of the Great War on the people of Bristol and the West, featuring many forgotten songs, poems and pictures of the period, including the wonderful title song, based on an anonymous poem..

The Friends of Bristol Museum, for whom this was performed in November 2014, called it "a truly memorable event …..They had obviously researched the topic thoroughly ….and put together for us a professional performance which was informative, humorous and poignant"

The Howlers performed their latest presentation "Stony Broke in No-Man's Land"  to a hugely appreciative audience of Friends of the Bristol Museum in November, just before Remembrance Day.  We wanted to do somehting about the Great War which would not rely on the songs and tunes commonly associated with it, and in particular we wanted to reflect, as far as possible, those aspects of the war which affected the peopl of Bristol and the surrounding counties.  The resulting show is a mix of readings, poems, narration, pictures and songs which we feel is faithful to the many facets of this huge and terrible war, and shows the humour as well as the pain with which ordinary people coped with this extraordinary period.   We will be performing again in June next year, at Staple Hill Methodist Church, and in November at Kilmersdon in Somerset, but we are open to invites elsewhere.  All profits go to the British Red Cross.  If you are interested in seeing the show, or, better still, promoting it at a venue near you, please contact us on maymorning@sky.com

THe Great War in Bristol

We are currently working on a new production, of songs, poems and readings from the Great War, with particular focus on the impact of the war in and around Bristol and its people.  This will initially be performed for the Friends of Bristol Museum, who asked us to put together a show, but we hope to take it to other venues over the next year.  If you might be interested in having a performance, we'd be delighted to hear from you!  (Go to Contact Us in the header bar)

The Howlers have now launched their latest CD, Kiss Me Now or Never, a compilation of songs collected in the Mendips by Cecil Sharp and the Hammond Brothers. A mammoth 22 songs and tunes!  As usual, our beautiful cover artwork is by Chrissie Molan.  Clips and details of how to buy to follow shortly!