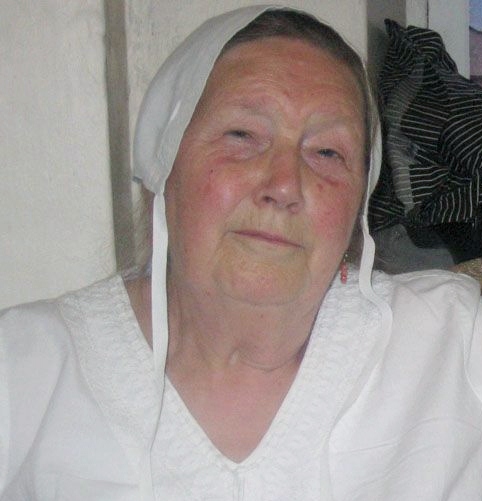 Olga discovered the Folk Tradition club a few years after it had been established and was soon an enthusiastic folkie.

After a while she could be seen carting a suitcase full of song books, badges and Morris bells around the clubs as an itinerant EFDSS Folk Shop, and visiting singarounds and folk weekends at Pennymoor and Whittlebury.

For a while she was drummer with the ceilidh band Kit and Boodle, helped run the Folk Tradition lamb or pig roasts at Fairlands, near Cheddar, and learned to play bones and spoons by practicing for ages!

She had a small part in ?Alongside Bristol Quay? a folk theatre presentation composed by John Shaw and Dave Byrne.

As the initial fire of the Folk revival burnt low, Olga took on the management of the Folk Tradition Club, and with the help of friends, kept it going until 2000.

A year or two later Olga joined the Hotwells Howlers, when several female singers had retired, and beside regular gigs, she has taken part with great enjoyment in the ?folk theatre? productions, such as ?Cecil Sharp?s Big Night Out?,? Isambard?s Kingdom?, and ?William Winter?s Tale?.

Beside the Howlers, she sings in her local church choir, and with ?Bristol Harmony? and ?Called To Be Saints?, two West Gallery choirs.

She is currently practicing on her McCann Duet concertina, hoping to become proficient enough to play in the band before it is too late.